As I mentioned in my last post, I love love love fermenting food. For a long time I was interested but terrified – terrified of botulism (which you actually can’t get from fermenting food, just from canning it improperly) or any other undetectable-yet-deadly bacteria I might grow and then unknowingly kill myself and others with. I went to a lot of workshops and read some books and then was lucky enough to live with my very dear friend Farmer B. Farmer B is not only fearless about this kind of thing but also has a real talent and instinct for it. She’s a bacteria and yeast whisperer, you might say. 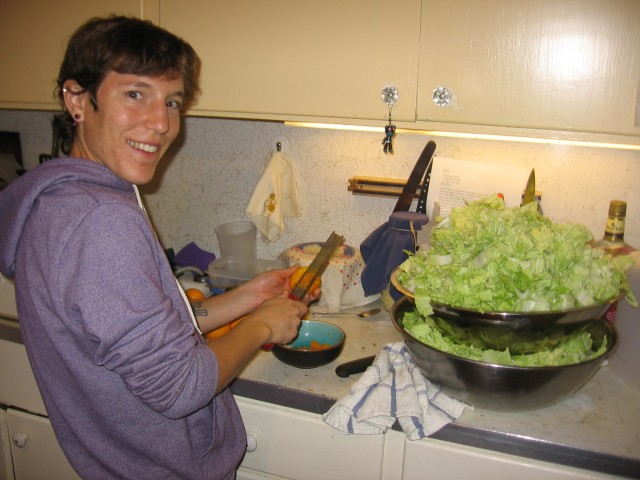 Farmer B getting ready to do some bacteria-whispering

The other barrier to doing urban-homesteader type food projects is time. There’s a reason we as a civilization have moved further and further away from DIY methods and developed all these conveniences – they save us the tons of time it takes to make foods by hand. To ferment vegetables you have to brine them for hours. Canning similarly involves hours of sterilizing, filling, boiling, etc. Of course a lot of this is down time, but let’s be realistic, you’re still going to spend the whole day in the kitchen.

So many veggies to chop and brine...

Which is why Farmer B and I created Culture Club. When you can chat while you chop and play games while the veggies are brining, crafting food becomes a party rather than a chore. It’s been hard to coordinate Culture Club with Farmer B so frequently away (farming!) but we took advantage of a window of Bay Area time and gathered friends together. 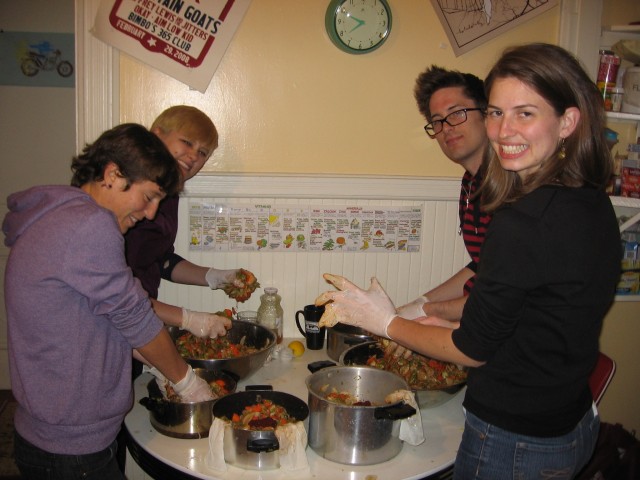 It's better with friends!

Culture Club has two components. One is making foods and the other is tasting/demoing foods. This is so that people who are perhaps interested in kombucha, say, can taste it and get an overview of the process before they commit to making it themselves. This time around we had two projects. The first was kimchi, using a recipe from Sandor Katz’s marvelous book Wild Fermentation. (Katz has been invaluable in helping me get over my paranoia about killing my loved ones with improperly fermented foods.) Culture Club had previously made a radish and roots kimchi, but this time around we went for the classic combination of napa cabbage, carrot, and daikon radish.

Our second project was a blood orange cordial. A few months ago, I found an electric cordial maker (called “Cordially Yours!“) at Goodwill that promised to make cordial in hours rather than weeks, and I was super excited to test it out. I had done a small test-batch a few days earlier (no sense in wasting all that vodka if the thing didn’t even work) with Royal mandarins, but then a friend brought over blood oranges for a snack during a movie night and Farmer B and I just fell in love with the color. How dreamy would it be to have blood-orange colored cordial? 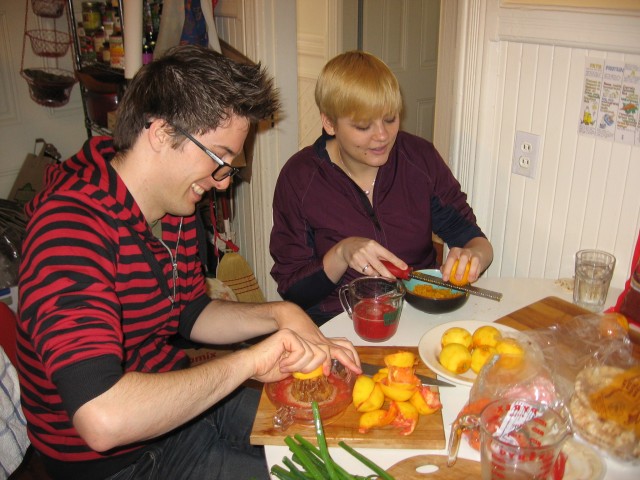 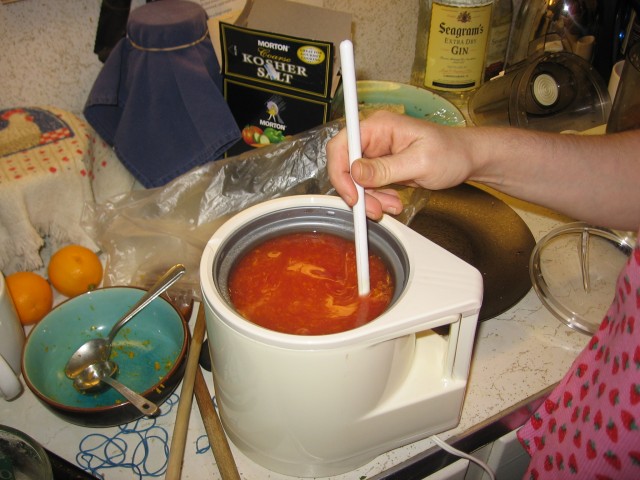 While we waited for the vegetables to brine and the cordial maker to work its magic, we had our demo/tastings/lunch. Farmer B brought kombucha for all to try, and made a big pot of ogi, a fermented millet porridge, following another Sandor Katz recipe. We ate the ogi with stir-fried Chinese greens and homemade sauerkraut and turnip pickles, which were my contributions to the tasting party. I rounded out our lunch with cheela (mung bean pancakes) with tomato-coconut chutney. We also enjoyed a healthy amount of my initial test batch of cordial, which we had to drink for informational purposes of course. How could we know how to adjust the recipe if we didn’t drink thoroughly of the test version? And no Culture Club would be complete without a rousing round of some game, so after lunch we sat down with Balderdash (“the hilarious bluffing game!”) while we waited on the vegetables.

Tasting cordial out on the porch, where we brought the brine to cool it in the open air

Once the vegetables had finished brining, we mixed them with a paste we’d made in the food processor of garlic, scallions, and ginger. I use a special Korean chili flake that seems like it has been deyhydrated in some way (not just dried, which I realize is the definition of “dehydration” but these seem like they were made into chili paste and then that was dehydrated and flaked and then you reconstitute it with warm water) and we made a paste from that and added it in as well. Kimchi can take a lot of heat before it starts to get spicy – we went through almost an entire giant bag of chili flakes.

Mixing the kimchi is the best part of the whole experience. We get to wear gloves – it’s DIY food surgery! (Is that gross?) The chile paste and the salty brine can be quite painful on your hands, but with protection you can flip and toss to your heart’s content. 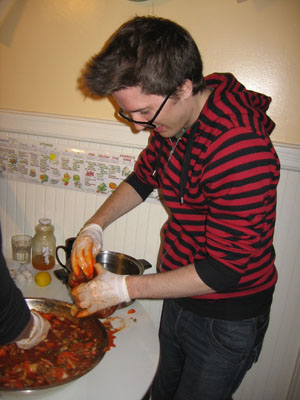 The cordial finished with little fanfare. It turned out I hadn’t stirred long enough to dissolve all the sugar so there was a (tasty) bunch of it left on the bottom of the machine, which hadn’t happened during my test run. Even though the Cordially Yours! remarkably cuts the time cordials need to sit, the instructions do recommend that fruit cordials be allowed to steep for three days after the machine has worked its magic. So we poured it into jars and sent everyone home with their cordial and their kimchi. In three days and a week or two, respectively, each would blossom into the exciting foodstuffs of our dreams! (I know that’s the stupidest ending sentence ever for a blog post but it’s been a really long day and for some reason this post took forever to write. The whole “story in pictures” thing was supposed to make it go faster, but apparently that plan was a failure. Anyways. Let’s look at the pretty pretty things we made:)

The finished products! Blood orange cordial in the foreground, kimchi in the background.

3 comments on “Culture Club ~ A story in (mostly) pictures”