Back when I still thought my problem with turnips was not having found the right way to cook them (as opposed to simply disliking them in general), I tried them three different ways in one night. Of course I ended up not very satisfied with any of those (because I don’t like turnips). But after trying some raw turnip that evening, I thought they might make good pickles. This, I suggested while the turnip project still had appeal, would be the fourth way to try turnips. 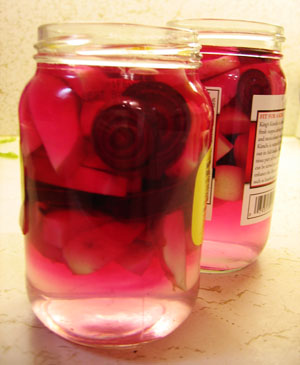 Fast forward many months. A new round of turnip delivery begins. Duck and I eat the yummy greens very happily (and for all the people who find this site by googling “turnip greens” or “how to cook turnip greens” I recommend preparing them, alone or with other greens, steamed and then topped with kale sauce or sauteed “Venice” style or Asian style with ginger and garlic). But the turnips themselves sit in the fridge, unloved.

Then I remembered a favorite culinary memory. In New York, all the falafel places give you these yummy pink pickles with your food. They always seemed like radishes to me, but with a more rubbery rather than crunchy texture. Finally I asked a falafel cook what they were, and he told me they were pickled turnips. As far as I know, these pickles were my main contact with turnips before the advent of the CSA, but I completely forgot about them. The memory returned in my time of need as I stood staring at several bags of turnips nestled amidst the lettuce graveyard in my fridge. 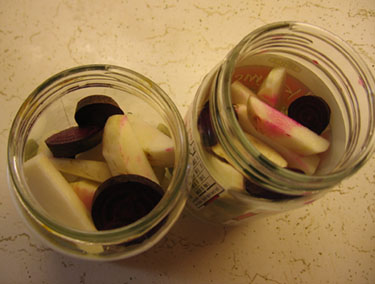 But what turns white turnips into pink pickles? It turns out sliced beets do, and a bunch of beets arrived fortuitously in the next box. Google led me to a recipe on the madKnews blog, and I put my turnips in to pickle before leaving on my big Midwestern adventure. (These are “refrigerator pickles” so they don’t get canned, just stuck in the fridge to sit in a vinegar solution.)

Tonight the pickles had their grand unveiling. They’d been hanging out in their vinegar baths for thirteen days, several days more than the recipe recommended, so I wasn’t sure what to expect. Duck and I wanted to showcase them in their optimal setting, so we made homemade falafel to put on fresh lavash bread with heirloom tomatoes, tender red leaf lettuce, a squeeze of meyer lemon and a generous spread of Haig’s baba ganoush, a local delicacy and one of my favorite things.

We tried the pickles straight first, and then rolled them into sandwiches with all the other goodies. The first pickle-only bite was so spicy, I felt like I’d licked the maror dish at Passover (that would be a bowl of horseradish for those of you who are seder-uninitiated). And Duck made a face when he tried his that made me certain I was going to be eating two jars of turnip pickles by my lonesome. But then his fingers kept sneaking back into the jar.

“I don’t know if I like them,” he replied, “but I seem to be addicted to them.” At least that’s what I think he said – his mouth was full of turnip pickle at the time.

Subsequent bites proved a little more mellow. And the little guys were absolutely phenomenal in our falafel wraps. I’m having a hard time finding words to describe their flavor. Zesty, certainly. And so yummy I was stuffing another little slice into each bite of my wrap. It looks like, after what ended up being considerably more than four tries, I have at last found a way to enjoy my turnips!

Turnip Pickles (recipe is straight from the madKnews blog)

Place the turnips and the beet into a jar large enough to hold them – one that has a close fitting lid.

In a non-reactive pot (glass, enamel or stainless steel) combine the water, vinegar, sugar and salt and heat, stirring, until salt and sugar are dissolved. Cool, then pour over the turnips in the jar. Cover the jar tightly.

I store these in the refrigerator. They are ready to eat in a week.

Note: The beet is there to color the turnips, but you can eat the slices if you wish.

12 comments on “The fourth way”