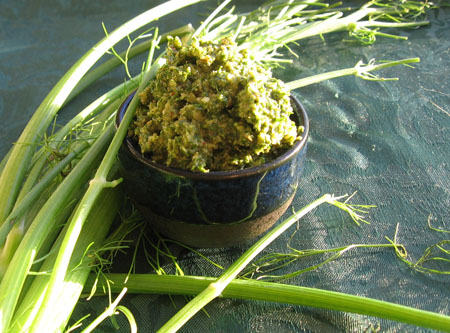 The huge fennel bulb in my CSA box came with plenty of glorious stalks and fronds attached. It seemed like a travesty to just compost them, so I set the stalks aside for luscious fennel-broth, after first stripping them of all their fronds to make fennel pesto. I based the recipe on the one I use to make vegan basil pesto, and it came out delicious, but with a very pronounced fennel flavor. This is not something I would serve to people if I didn’t have hard and fast prior confirmation that they liked the taste of fennel. For fennel-lovers, however, this will be a real treat!

Another consequence of being too tired to cook or blog or generally do anything was that my veggie scraps really started piling up. By early this week most of my fridge’s top shelf seemed to be devoted to scraps, waiting like pining lovers for the transformative kiss of the stock pot. So when I finally started to have a bit more energy, it was time to brew up some stock and get that shelf cleared.

I ended up having enough material to make two pots of stock, ending up with 13 cups of rich, savory broth, tinged a beautiful pink from the beet scraps. My freezer is truly well stocked now, which saves me from treating the stock like it is a scarce commodity. 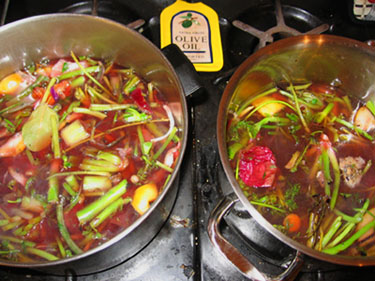 In this mega-edition of scrap stock:

Getting bored of my surely less-than-engrossing detailed account of what I put in my stock each week? Well, I’d like to keep track of it for my own purposes and something tells me there’s a short life-expectancy for the soggy little scraps of scratch paper I use to record all the components as I toss them in the pot.

This week was not as successful, I think because of technical difficulties. I left the pot alone for its simmering time (I’m usually in the kitchen with it doing kitchen things, but I was in another room this time) and I think the fire may have actually gone out. So this round of stock is very mild. However it will serve to add a bit of flavor and nutrition to something that wants a mild broth, like risotto, so perhaps it is actually a blessing to have one batch with a decidedly non-aggressive character. I was a bit let down, though, since I felt like I was being wild and throwing caution to the winds, what with all the ginger peels and lemon balm stalks. 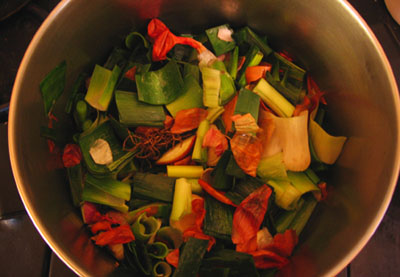 I googled “scrap stock” and found an interesting recipe from the civil war. Inspired by this, I added an apple core to my pot (although I forgot to save most of them this week – I need to get in the habit of putting them in the stock box and not the compost). I quite flagrantly ignored the admonition to never use cabbage scraps, however. Take what you like and leave the rest, right?

Into this week’s pot:

I report to you live from the salad front, your brave investigator into the perverse and often baffling world of salad dressing. It saddens me to have to report that, once again, and despite a rousing attempt involving lettuce, fennel, sugar snap peas, Point Reyes Farmstead blue cheese, and strawberries, for goodness sake, we can add another strike to the list. This time the no-go concoction was a balsamic-shallot vinaigrette from Deborah Madison’s Vegetarian Cooking for Everyone. 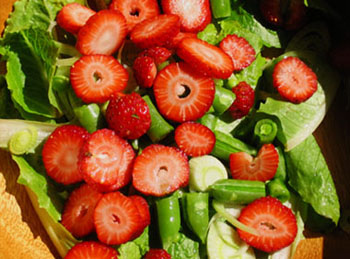 Is it possible that I just don’t like dressing? The way it turns out I don’t like turnips? No, I like salad. And I often like salads in restaurants. And those generally have dressing on them. I just never seem to be satisfied with the dressings I make, no matter what I do. Whether I wing it or carefully follow a recipe, they are invariably too oily or too vinegary or too bland or too seasoned.

I feel like a salad idiot. It seems like one of those things you would joke about someone not being able to cook. “She can’t even boil an egg! Or make pasta! Or salad! Ha, ha! She can’t even cook salad!” Well, I can’t. And I am feeling quite disgruntled at this point, let me tell you. But my box continues to bring lettuce upon lettuce. And so we soldier on.

I was so nervous making this week’s scrap stock! I think I was worried that last week’s good results were sheer random luck and that it was statistically unlikely I would succeed again if I just did a repeat of last week’s method of simply cooking up all my veggie scraps from the past week, without regard to composition. But I gave it another shot. This week’s stock came out quite rich and quite assertive, which is unsurprising given that there were many asparagus stalks, fennel tops, and even two heads of roasted garlic that had been emptied of their yummy gooey cloves. I think it would make a delicious soup base, but I wouldn’t use it for something like risotto, because it would just take over the dish. 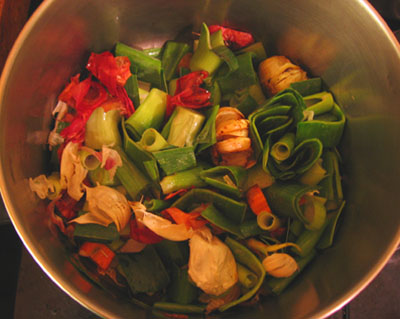 The other night my mom and I had dinner at Delfina. We’ve been fantasizing about the restaurant since we stumbled in there by accident during a rainstorm a few years ago and had an incredible, unforgettable meal. This time around, unfortunately, was nowhere near that magical experience. The quality of the execution of the food was still very good, there just wasn’t anything on the menu that we were particularly excited about ordering to begin with. Partly the problem was that I had to choose between fish, which I don’t eat much anymore, and wheat, which I don’t eat much anymore. I chose wheat (better for me to suffer than the fish!) and my pasta with breadcrumbs (I know, I know, I’m insane) was tasty but too rich, too heavy, and made me want to lay my head down on the table for a nap. 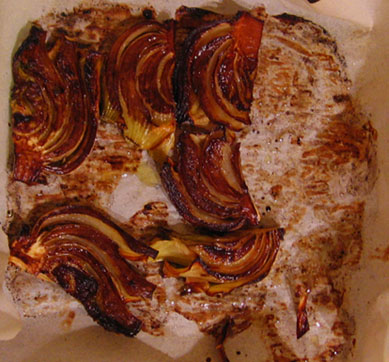 The highlight of the meal (as it so often is for me in European restaurants) was our side dish – some kind of grilled or roasted fennel (I was too sleepy to remember exactly how it was prepared) that was caramelized to an exquisite, tender sweetness. I was thrilled to pick up my box the next day and find a lovely bulb of Florence fennel waiting for me, ready for an encore. I googled for roasted fennel and ended up using a simple recipe from the appropriately named Simply Recipes blog.

I only have a couple of notes to add to Elise’s excellent recipe. The first is a tip I found mentioned in several other posts about fennel, which is to leave the bulb connected at the base and then make your slices vertically through the bulb, so the base holds each slice together and you don’t end up with many little fennel strips. The other note I would add is that the cooking time was much longer for me, so I would use the 15-20 minutes as a starting place but really keep checking the tenderness of the fennel. It is done when it is quite tender and at least somewhat caramelized.

To prepare fennel, trim off the stems (the green stalks with the fronds), slice the bulb in half length-wise, put the cut side down and cut into 1/2 inch slices. Do not trim off the base! You want to keep it intact so it holds the layers of fennel together.

Rub both sides of fennel slices with olive oil, enough to coat. Line a baking dish with parchment paper, aluminum foil, or a silpat mat. Place fennel slices in baking dish in a single layer. Sprinkle with balsamic vinegar, enough to coat. You can sprinkle with a little salt and pepper, but I thought it was plenty flavorful without them. Cook for 40 minutes or so, until the fennel is quite tender, golden brown and beginning to caramelize.