Even the most casual reader of this blog can probably tell I have a passion for seasonal eating. One of my favorite toy/refrigerator artwork/culinary aids is the Local Foods Wheel, a gorgeous paper wheel that you turn as the months progress and as you do so it reveals what foods are in season at that time. April is a fun month, full of yummy springs treats like radishes and pea greens and morels. I also noticed, when I spun the wheel into April, that it features a couple of things I’d never eaten – nettles and cardoons. I didn’t have any idea what cardoons were, actually. From the picture on the wheel, which I’ve been glancing at every April for the past several years, I gathered they were some sort of large, tan celery-like plant, but I’d never seen them anywhere outside the wheel, like on a menu or in a recipe or at the market.

This past Wednesday was the grand reopening of my local farmer’s market, which has been on seasonal hiatus since last October. I was there practically the minute the market opened, canvas bag in hand, cash in my pocket, camera at the ready. Imagine my delight when I came across these ugly beasties, all hard and spiny and prickling with tiny thorns: 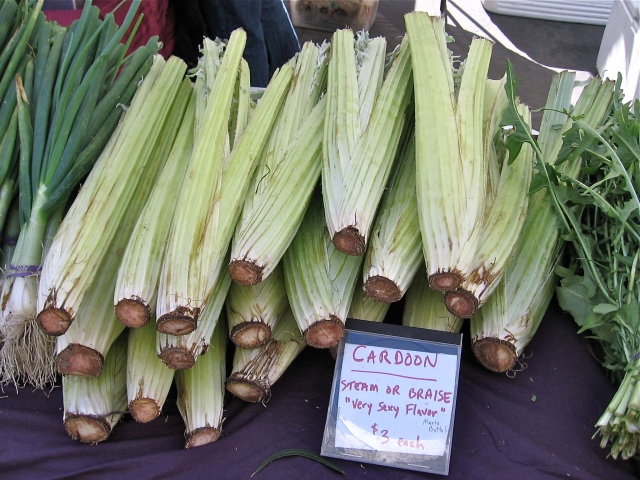 As I was buying my bunch, I asked the farmer if he had any tips on how to cook them, and he admitted he’d never eaten them! That was a bit daunting, but I figured it was now or never if I was going to experience the elusive cardoon. My internet searching found a few concepts repeated over and over again. Cardoons have an “artichokey” flavor. They are time-consuming and laborious to prepare, with folks being fairly evenly split over whether or not they are worth the trouble. The methods I came across for how to cook them were braising, frying, gratin, and some sort of ancient Roman way involving honey. I don’t really care for sweet-savory food, so the Roman way was out, and vegan gratins tend to be a lot of extra work. I’m not particularly partial to fried foods, plus that seemed like the wrong way to experience a vegetable for the first time. That left braising, which was actually awesome, since, in addition to being super into seasonal eating, I’m also kind of obsessed with braising things in my Le Creuset Dutch oven.

First I followed a guide to preparing cardoons. Yep, there’s a whole guide for what you need to do to them before you actually use them in any given recipe. This involved trimming them, peeling off the tiny thorns that run along the edges of the stalks, and then peeling off the spines of each stalk. After that I cut the stalks into pieces and soaked them in a bowl of water with vinegar for half an hour. Then I parboiled the cardoons in the vinegar water for 10 minutes. Then at last it was time to actually get around to braising them. I followed a very simple recipe, just Earth Balance, shallots, veggie broth, salt, and pepper. The recipe also calls for bread crumbs but I skipped them. 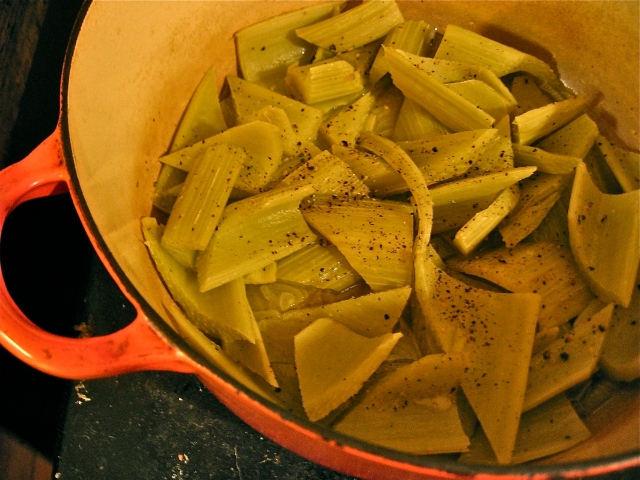 So now that I’ve found them and I’ve cooked them, I can report: cardoons are amazing. They have the texture of firm, cooked celery. Not unpleasant. They have the flavor of something like a cross between cooked celery and an artichoke heart. I had a giant pile of artichoke heart-flavored food. When you think about it that way – and consider the amount of work it takes to get to a freshly cooked artichoke heart – the cardoon’s labor to flavor ratio is actually quite reasonable. You know that elusive sweet flavor that is so distinctive to artichoke hearts? Cardoons have that particular note. They’re awesome. My mouth has been dreaming of them all week. “Very sexy flavor,” indeed!

Braised Cardoons with Shallots
This recipe is direct from The Kitchn, I’ve just collated two recipes here (“How to Prepare Cardoons” and “Braised Cardoons“) for your cardoon preparation convenience.

To prepare cardoons, first trim off the bottom and pull apart the stalks. Using a vegetable peeler, be sure to peel the edges of the stalks – by this I mean the top parts where the “U” forms two edges. They are covered with fine, hair-like thorns and need to be removed. Remove the leaves as well as they contain thorns. Then peel the spiny, stringy fibers off the backs of the stalks.

Cut the stalks into three-inch pieces and then cut each piece in half diagonally. Soak the cardoon pieces in a bowl of water with 2 tablespoons of white vinegar for thirty minutes; the vinegar helps to reduce the bitter taste of cardoons and prevents discoloration.

Next, parboil the cardoons in the acidulated water for 7 to 10 minutes, drain, and run cold water over them.

Now the cardoons are ready for braising!

Preheat the oven to 450 degrees F. In a baking dish, add the cardoons, the broth, and the shallots. Top with the butter pieces and season with salt and pepper. Cover the dish with foil and bake for 20 to 25 minutes, checking every 10 minutes to make sure the liquids haven’t completely evaporated. If they have, then add more broth. Cardoons are ready when tender.

If using breadcrumbs: Remove the dish from the oven and turn on the broiler. Remove the foil and sprinkle the bread crumbs on top, and put back into the oven for 5 minutes or until the cread crumbs are nicely toasted.