Many, many plums. That is what I was facing as I began using up perishable food a few days before the weeklong retreat/intensive that begins my school year. I am not a great fan of plums, and even less of pluots. The ones that have been coming in my Full Circle box have been very good, but even still I am not likely to eat 3 or 4 in a day the way I can with nectarines or peaches. So I had about 15 plums and pluots hanging out, looking lovely and ripe but definitely not like they were going to survive for another ten days until I returned from my trip.

In another life, I would have made clafouti. Summer used to be an endless cascade of clafouti, moving through nectarines and cherries and plums as they came into season in turn. However, though there are indeed recipes out there, vegan, gluten-free clafouti is just nasty. So I needed something else to turn my pile of plums into an appealing and easily scarfable treat. 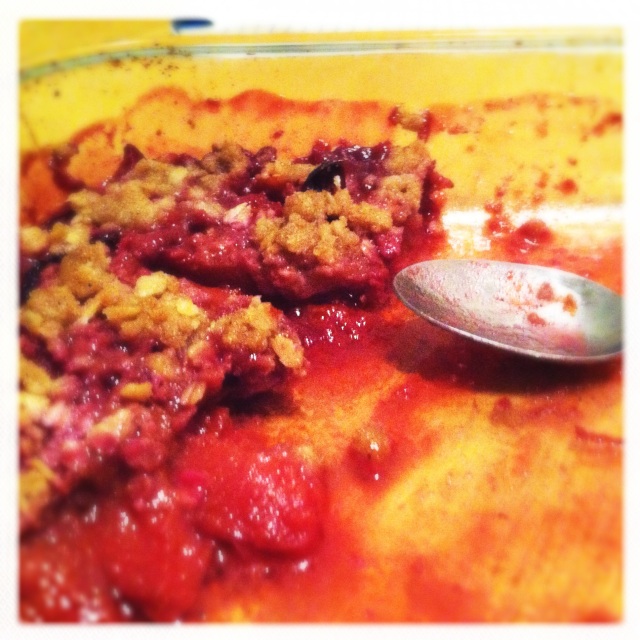 I ended up making a crumble (a crisp? I don’t really know the difference), taking inspiration from Deborah Madison and Jennifer Katzinger of the gluten-free Flying Apron Bakery in Seattle. It was delicious! Sweet enough to be dessert but fruit-focused enough to make a passable (if indulgent) breakfast. I had my auntie over for tea and we enjoyed some Plum Yum and a good chat.

Preheat the oven to 375.
In a large bowl, toss the sliced plums with the maple syrup, orange zest, and cloves and set aside.
Using your fingers, work the Earth Balance with the rest of the topping ingredients so that you end up with a coarse, crumbly mixture. You don’t want big chunks of margarine remaining un-crumbled.
Arrange the fruit in a 2-quart gratin dish or sufficiently large casserole (I used a brownie pan) and cover evenly with the topping.
If you’re worried about spillage, set the dish on a sheet pan to catch drips.
Bake until the juices are bubbling and the topping has browned a bit, about 1 hour and 15 minutes. GF topping usually won’t brown as promptly as wheat flour topping, but on the other hand it’s hard to overcook this unless you actually burn it, so use your best judgement – once the plum juice is bubbling, take it out or leave it in til it looks like something you’d want to eat.
Let cool for 10 minutes and serve hot, or serve cold any time. (I recommend breakfast!)