A report from my first week of concertedly budgeted shopping/meal planning: 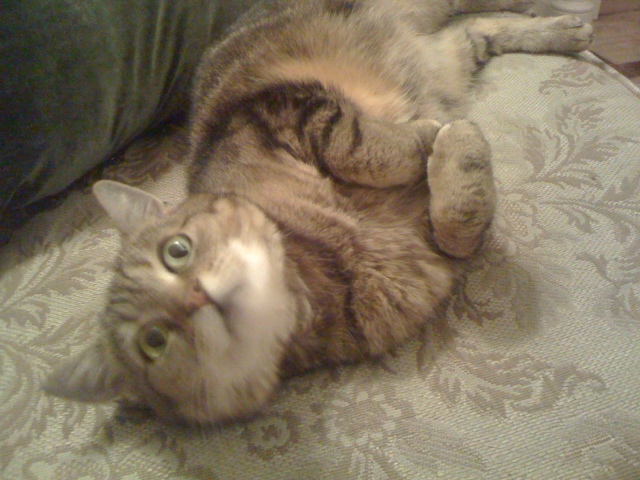 Good thing you're so cute, Violet! Considering that kitty litter was my largest single purchase this month...

A little review of last week’s meals: The Spanish tortilla was amazing, though a fair amount of time and work. I would definitely make it again, though, as a special comfort-food treat. I thought I knew in advance what the yam, black bean, and amaranth burritos (I made soft tacos) would taste like, but they blew me away beyond my wildest expectations! Buckwheat, kale, parsnips and brussels sprouts with shitake mushrooms (before you have a budget-related heart attack, I use dried shitake mushrooms that are around $3.50 for 40 at the Asian market) was a little bland but generally delicious and impressively cheap thanks to Safeway’s sale on brussels sprouts. (I didn’t use the cream this recipe called for – I was going to sub with Mimicreme but I didn’t want to open a whole box to use one tablespoon.) Instead of cannellini and chard risotto (which I apparently was meant to be saving my vegan cream cheese for, but no one told me that before I guzzled it down earlier in the week) and roasted broccoli, I made Post Punk Kitchen’s Miso Soba Stir-Fry with Beans and Greens. It was awesome! Using miso to make a delicious, flavorful, easy pasta sauce is a pretty rad idea, Isa. 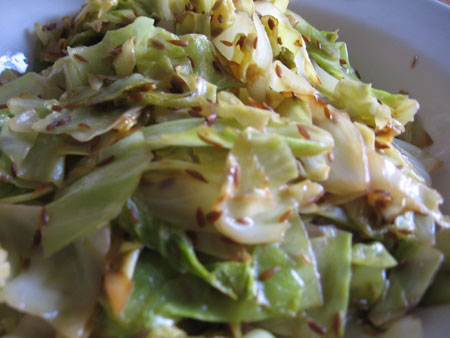 Cabbage with cumin seeds (from this week's menu)

Thank you for wading through all my rambling and reminiscing. It is finally time for this week’s menu! I’ve been spending a lot of time on the Post Punk Kitchen’s forums (so fun! you can find me there as Scrumptious, just like I am here) and this week’s cookbook challenge is for Veganomicon. So I’m going to try to draw some of my recipes from there. (And, looking through the cookbook, I am reminded once again that bizarrely almost none of the recipes in VCon sound appealing to me.) I also have several meals I never made last week to carry over.

This week’s Gluten Free Menu Swap has the theme of Winter Vegetables for inspiration, thanks to Wendy of Celiacs in the House. Winter veggies are my favorites. I much prefer kale and sweet potatoes to tomatoes and more tomatoes! This week I have kale, sweet potatoes, asparagus, cabbage, regular potatoes, and brussels sprouts, as well as beets and baby turnips to make turnip pickles.

And don’t forget to check out the giant MPM compendium over at OrgJunkie for more inspiration!

Monday
Cooking with friends. I have no idea what we’ll make. Hopefully it can be cheap and yet not awkward…

Sunday
Leftovers if I’m out all day or a GF version of VCon’s Chickpea Cutlets, made into nuggets, if I stay home
Roasted brussels sprouts (defrosted from last week’s mega sprouts cooking)