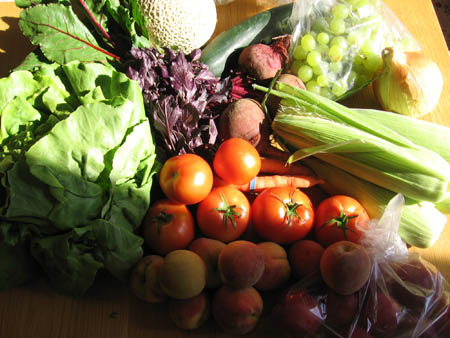 I don’t mean to be off the cuff about it. Tyranny is still being felt all over the world in so many forms, including right now in France with the racist political maneuvering of the burqa ban.

But I have such a special place in my heart for Bastille Day. I attended a bilingual and bicultural French- American school growing up, and I experienced my first French Bastille Day in Paris at the age of seven. I mostly ignored the most recent 4th of July while at home working on my grad school application, listening to the faint booms echoing from way out over the water. But today I wanted to hear La Marseillaise. It must be a childhood thing – it just makes me so happy. Or maybe it’s that my French is bad enough now that I just hear the stirring music and don’t have to think about things like “May an impure blood water our furrows!”

At any rate, my Bastille Day box was gorgeous, with one notable exception. Truly beautiful corn and plums – perfect for any independence day celebration, whether here or abroad. Pre-vegan days I would have made clafoutis with the plums, kicking off a summer’s worth of stone-fruit clafoutis. Doing a quick Food Blog Search for “vegan clafouti” I found several interesting recipes using silken tofu or chia seeds, so I may have to give them both a shot. It just isn’t summer without clafoutis.

The one major disappointment in my box this week was the bag of green grapes. They were mushy and tasted of mold, throughout the entire bag. I had to toss the whole bunch straight into the compost. What a shame! I’ve enjoyed so many fresh grapes lately (plus I’m not partial to green grapes in general) so this bunch was going to go into the freezer  for a most delicious, decadent summer dessert/snack. Ah well, I will take the advice of the French (Marchons! Marchons!) and move on from the disappointing grapes to the yummilicious rest of my box. For instance, I tried one of my tomatoes today. I didn’t have high hopes for it because it was a pallid, unassuming little fellow. But the flavor it packed took me back to my childhood, to the time when tomatoes were treasures and their taste exploded with summer.