On Thanksgiving, as on all Thanksgivings, we ate and ate and ate. Thanks to a menu that leaned generally towards the healthy side, I actually didn’t get that traditional, but painful, groaningly stuffed feeling. I felt just right – like I had feasted but not overindulged. However, there was still an entire dessert course waiting to be conquered – or would it conquer us?

We decided to go for a walk. After much bundling up and changing of shoes, we all trooped out to Golden Gate Park. The whole neighborhood was nearly deserted, even usually-bustling Haight Street was dark and silent. We moved in and out of happy, chatting pairings between old friends and new acquaintances. I led us in a big loop through the park and the Panhandle, but it didn’t really matter where we were going. This wasn’t actually about the fresh air or the exercise or the sightseeing. This was about making room for dessert!

We returned home having found a few crevices and crannies in our bellies where just a bite of something sweet might possibly find a home. Duck and I had planned the dessert course with even more military precision than the rest of the meal, attending to the balance between chocolate, spices and fruit, making sure to include a complement of traditional holiday flavors, and supplying beverage choices ranging from tea and coffee to a honeyed, floral dessert wine.

More on each dish follows…

The first offering was a vegan chocolate mousse that we’ve been making for a while now, inspired by one we used to buy as a special treat from Whole Foods. The mousse is so ridiculously easy to make that it feels almost like cheating, especially when we serve it to other people and watch them go nuts! First of all, it is impossible to “tell” that the mousse is vegan, by which I mean it has no off or unexpected flavors, and especially no tofu flavor. But even better than that, many people say it is among the best chocolate mousses they’ve ever eaten. And when you consider the amount of heavy cream that goes into a dairy chocolate mousse, this version starts to look a lot like (relative) health without flavor compromise for vegans and non-vegans alike!

To make the chocolate mousse into something really special for Thanksgiving, I hit up my local Goodwill for a variety of tiny stemmed glasses. After the mousse was made it was poured into the individual glasses and allowed to set for several days. Each guest was then presented with a lovely little glass of rich mousse. We served the mousse with whipped cream (sorry vegan folks, that’s real humane Clover Stornetta dairy cream in the photo – the Soyatoo vegan cream in a can was not so photogenic) and Bonne Maman Four Fruits Preserve (basically, berry jam). The preserves temper the richness of the chocolate perfectly – the two together are an elegant combination.

The next dessert was obvious to me – we had to have pumpkin pie. It didn’t matter if this one was vegan or not, as Duck considers pumpkin pie to be the epitome of food he dislikes, and our other vegan guests were similarly disinterested.  It did have to be gluten-free, however, so I could enjoy my personal favorite part of Thanksgiving, which is pumpkin pie for breakfast the next day. I have made exactly two pie crusts in my life, neither of them gluten-free, and I wasn’t about to start now, with all the other million things there were to do. So we picked up a gluten-free, dairy-free pumpkin pie made by Crave Bakery. We picked up two, actually, because they’re small and I wanted to make sure I had a slice left for breakfast.

Well, Crave Bakery, I appreciate so much that you make gluten-free baked goods for all of us out there who need them, but your pumpkin pie sucks. It’s just plain gross. Inedible. Nasty. Tasteless, watery filling, and pasty tasteless crust with an unbaked texture. Maybe I would feel less cranky if I hadn’t bought $34 of pumpkin pie. After Thanksgiving I gave away the second pie to a guy with celiac on Freecycle, and he liked his free pie just fine. I, however, could not even bring myself to eat more than a morsel of it for breakfast, and I really, really tried.

Choosing our final dessert was a bit of a conundrum, and one of the last parts orchestrated in this whole production. I was leaning towards some sort of fruit dessert, but Duck is not a fan of cooked fruit in any format. Duck was leaning towards the ginger end of things, but as we combed the internet we couldn’t come up with a ginger cookie recipe that was both gluten-free and vegan, and we don’t have enough baking experience with either that we felt comfortable winging it and converting a recipe, at least not for such an occasion as our first vegan, gluten-free family Thanksgiving. But as the day drew closer and we realized how on top of things we were, and how few things were actually on the schedule for the days leading up to the big dinner, it seemed obvious that there was room for more than one final dessert.

And so the best kind of compromise was reached – the kind where everyone gets what they want and the only compromise that has to take place is between you and your belt notches as you surreptitiously loosen them to accommodate that fourth dessert option. I made poached pears in a spiced wine syrup that turned a deep, ruby red on the outside, but were still creamy white when you sliced into them. Gorgeous and delicious! And Duck made incredible ginger cookies, the soft and chewy kind with the crackly sugared tops. These were enjoyed at the table but had their true moment in the sun during the hours we spent playing games after dinner. All the Cranium players could not stop eating them, despite the fact that some of our guests were on their second Thanksgiving of the day! 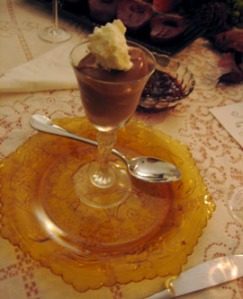 You can make this mousse a few days ahead of time, as it keeps for days in the fridge. Just make sure to cover it well with plastic wrap so it doesn’t absorb all the flavors of your fridge!
Serves 6-10.

* 1 package of silken tofu (the kind that comes in a vacuum-box)
* 10 oz chocolate chips, about one small package. (Make sure your chips are vegan! I like the Guittard vegan, fair-trade chocolate chips that I get bulk at Rainbow Grocery)
* 3 tablespoons maple syrup
* 1 tsp. vanilla extract; optional

1. Blend tofu (preferably at room temperature) in food processor, blender, or with hand mixer until just smooth.
2. In a double boiler, melt chocolate chips with a tablespoon or two of water over low heat. Stir constantly. (You can make a double boiler by holding a bowl or pot above another pot of boiling water.)
3. Add maple syrup to melted chocolate and combine.
4. Put chocolate & syrup blend into processor and mix with tofu until creamy.
5. Pour into small individual stemmed glasses for company, or into a large bowl or smaller bowls for casual eating. (You can’t eat more than a few spoonfulls at a time.) Serve warm or chill until set. (I find that the flavor is much better after it has been chilled.)

Red Wine-Poached Pears with Black Pepper and Cloves (from Cook’s Illustrated)
Make these pears at latest the night before you want to serve them. The recipe says they can chill for just two hours, but I found that giving them a whole day, and turning them periodically, made sure the entire pear turned a gorgeous, rich burgundy. Don’t be alarmed by the profusion of potentially clashing spices in the poaching liquid – the ultimate taste is wonderful. We put the leftover syrup on everything long after the pears were gone. It would make an amazing topping for vanilla ice cream!

For the best texture, try to buy pears that are neither fully ripe nor rock hard; choose those that yield just slightly when pressed. For the red wine, choose a dry medium-bodied red, such as a Côtes du Rhône, Pinot Noir, or Merlot. [Oh Cook’s Illustrated! You are so fancy! I used something called Cheap Red Wine and they were great!]
Serves 6-16, depending on whether you serve each person a half or whole pear.

1. Bring the wine, sugar, peppercorns, cloves, mint, thyme, vanilla seeds and pod, cinnamon, and salt to a simmer in a large saucepan over medium heat and cook, stirring occasionally, until sugar dissolves completely, about 5 minutes; cover and set aside until needed.

2. Peel, halve, and core the pears. {I used a melon baller to remove the central part with seeds – very pretty! I found removing the string running up the rest of the core ruined the look of the pear, so I left those in.]

3. Add the pears to the wine mixture. Bring to a boil over high heat, then reduce the heat to low, cover, and simmer until pears are tender and a toothpick or skewer can be inserted into pear with very little resistance, 10 to 20 minutes, gently turning the pears over every 5 or so minutes. [Don’t be alarmed that the pears are not fully stained with the wine color yet – this happens during the chilling, not the poaching.]

4. Using a slotted spoon, transfer the fruit to a shallow casserole dish. Return the syrup to medium heat and simmer until it is slightly thickened and measures 1 1/4 to 1 1/2 cups, about 15 minutes. Strain the syrup through a fine mesh strainer, then pour over the pears, discarding the strained solids.

5.Refrigerate the pears until well chilled, at least 2 hours or up to 3 days. [Check in on them and turn them, otherwise they will get little unstained spots where they are resting against the dish.] To serve, spoon portions of fruit and syrup into individual bowls.

*Removing Seeds From a Vanilla Bean
1. Cut beans in half lengthwise with a small, sharp knife.
2. Place the side of a knife at one end and press down to flatten the bean as you move the knife away from you.

Duck made the soft and chewy version, not the crispy version. He has some special trick with a jar and sugar that he uses to make the tops of the cookies get that straight-from-the-bakery crackled top that is all crusted with sugar. I will ask him to write it up and post it here when it does. I wish I had pictures of these cookies! They were delicious but they were even more impressive in how great they looked! (Well, I would say that since I couldn’t eat them, I could only appreciate their pretty looks.)

Directions:
Preheat oven to 350. Sift dry ingredients (except sugar) into a bowl and set aside. In a large bowl combine wet ingredients, including sugar and whisk or beat on medium until blended. Stir in the pre-sifted dry ingredients and mix until well combined.

Arrange the cookie dough by dropping tablespoonfulls of it onto a parchment or foil lined cookie sheet, leaving a little room for the cookies to spread.

To make awesome crackle-top cookies (you know you want ’em): Get a bowl of sugar ready. Take a drinking glass and press the bottom of the glass very gently against a cookie ball, just enough to get it a little greasy/moist from the dough, but with no clumps of cookie dough clinging to it. Then dip the glass in the sugar. For chewy cookies press the glass very lightly against the top of the cookie ball, just pressing it down slightly. Repeat this process for each cookie – you’ll need to get the glass “moist” and then dip in sugar each time. For crispier cookies press the cookies thinner.

Bake about 10 minutes at 350 on a greased cookie sheet.