When I think of sweet potato and kale soup, I think of winter, no question. It sounds like a healthy but still sturdy and comforting dish to make when the temperatures drop and just going outside seems to take more energy than usual. But one of the nice things about my box is that it keeps me truly seasonal. And this doesn’t just mean swearing off tomatoes for eight months of the year. It also means discovering that sweet potatoes and kale can be spring/summer seasonal vegetables. How do I know this? Well, there’s no hothouse at Eatwell, and it’s currently June, and there are the tenderest, most adorable sweet potatoes and a beautiful bunch of kale in my box.

Considering that I’m in San Francisco, summer is sadly often the time when you need a hearty, warming meal. Haven’t you heard the quote, widely attributed to Mark Twain? “The coldest winter I ever spent was a summer in San Francisco.” 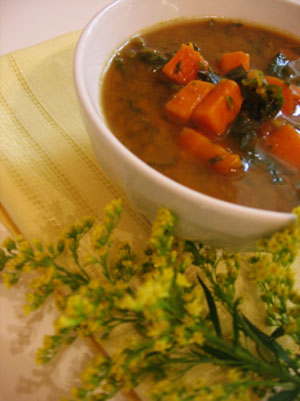 In addition to the sweet potatoes and kale, my box this week also included a newsletter featuring a recipe for sweet potato and kale soup. Duck and I decided this wasn’t the best use of our gorgeous bunch of purple-tinged kale (we love it so much plain – no, we crave it plain – that the box can’t even keep up with our appetite for plain kale, much less have anything leftover to be sticking in soups) but then Duck went out of town before we could eat the kale and I just couldn’t stop thinking about this soup.

I decided to make a batch of it, and I am really, really glad I did. The recipe brings out perfectly the sweetness of both the kale and the sweet potatoes, and the fennel seed manages to be interesting without being overpowering. I slightly tweaked the original recipe, which seems to be a home-invented one from another Eatweller. I changed the proportions and only blended part of the soup, so the texture I ended up with may be rather different from the original intent, but I thought it was perfect. I also worked a little FASS magic and added a touch of lemon juice – the dish is already perfect on the sweet and salty, and the cheese or yogurt or cream at the end takes care of fat, but it needed just a hint of acid for my tastes.

Surprisingly Spring/Summer Sweet Potato and Kale Soup
This recipe was created by an Eatwell CSA subscriber. You can use the carrot/radish elements interchangeably, or use turnips instead or in addition, if you don’t think they are kind of gross.

8 C. scrap stock (or other stock or broth) (I used 4 cups from batch I and 4 from batch IV)
4 small sweet potatoes, peeled and cut into small chunks
2 small carrots, halved and sliced
2 large radishes, chopped
6 cloves young garlic, pressed
1 1/2 t. ginger, grated or very finely minced, with juices from grating
3/4 t. turmeric
A sprinkle of fennel seeds
1/2 t. salt (or to taste, depending on how salty your broth is to begin with)
1 large or 2 small bunches kale, washed and chopped
A squeeze of lemon
Parmesan, creme fraiche, yogurt, vegan sour cream, etc.

Put stock in a pot and add sweet potatoes, carrot, radish, garlic, ginger, turmeric, fennel seeds, and salt. Bring to a boil and then simmer gently until the sweet potato is fork-tender. Add kale. When kale is tender, blend some of the soup (in batches) to desired texture. I blended about 3/4 of the sweet potatoes and half the kale, which formed a fairly thick (but not puree-like) soup base for the rest of the veggie pieces. You may wish to blend it all, or have clear broth with bits.

Ladle into bowls and top with a squeeze of lemon juice and a sprinkle of grated parmesan or a swirl of creme fraiche or yogurt.

Serves 4 (at one nice-sized bowl apiece)

5 comments on “Sweet potato and kale”