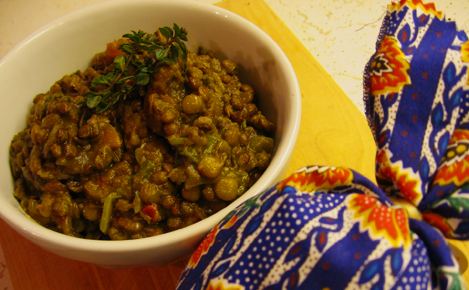 A while ago I came across a recipe for lentil soup with bourbon, a combination which makes me feel that through the sheer power of its ingredients alone it will conjure into being a roaring fire and possibly even some kind of alpine hut to go along with it. Perfect winter soup, in other words. Tonight I wanted something warm, and relatively simple, and filling, preferably with protein. But it turned out the aforementioned recipe called for red lentils, which I’m somehow out of, and of course bourbon, which I don’t own.

I did, however, have brown and French green lentils, a big bottle of brandy I use for cooking, and a shiny new copy of the amazing Veganomicon, a perfect Chanukah present from my mom for both Duck (vegan) and me (cookbook-obsessed vegetarian girlfriend of vegan).

I decided to make Veganomicon‘s yummy-sounding French Lentil Soup with Tarragon and Thyme. At the end I added my own finishing touch – fresh spinach and a generous splash (well, more of a pour, really) of brandy. And I can now state quite confidently that, when it comes to lentil soup, at least, everything’s better with brandy.

Recipe can be found beyond the “more” below.

Preheat a large soup pot over medium heat. Saute the onion and carrots in the oil for about 10 minutes, until the onions brown a bit. Add the garlic, tarragon, thyme, and paprika, and saute 2 more minutes. Add the tomatoes and a little splash of water if necessary, and stir to deglaze the pot. Cover and cook for 5 minutes.

Add the water, lentils, bay leaves, salt, and pepper, then cover and bring to a boil. Once the soup is boiling, lower the heat to a simmer and cook, covered, for about 45 minutes, or until the lentils are tender. Add the spinach and cook a few more minutes until tender. Add the brandy with the spinach if you want to cook off the alcohol, or add it is after you’ve turned off the heat if you want a boozier kick. If the soup looks too thin, uncover and simmer for a couple more minutes. If it looks too thick, add a little more water.

Enjoy in front of a roaring fire in your alpine hut.